New research from Salisbury House Wealth, the leading financial adviser, shows that the cost of retirement in London is 82% higher than in Nottingham, the cheapest major city in the UK for retirees.

Pensioners in the capital will need to have saved £458,478 by the time they are 67 to enjoy a basic income during retirement, compared to just £251,790 needed to retire in Nottingham.

Salisbury House has worked out how much individuals need to save in the Top 40 cities in the UK if they were to retire at the age of 67 and live to the local life expectancy. This is based on the assumption that they would need to earn two-thirds of the average median income for that area to enjoy a basic income in retirement.

Salisbury House Wealth says the research shows how it is crucial for people who live in areas with a high cost of living to ensure they have enough money saved to be able to afford a comfortable retirement.

Salisbury House Wealth says people cannot rely alone on the contributions of their employers into their workplace pension. They need to start saving into their pensions as early as possible and increase contributions in line with salary rises and promotions. It’s also important to keep an eye on the performance of your pension to ensure that your money is working as hard as possible and generating healthy returns.

Tim Holmes Managing Director at Salisbury House Wealth says: “The average cost of retirement in the UK varies enormously with a £207,000 disparity between the most and least expensive cities.”

“Everyone should be investing into a pension fund as early as possible and to top up contributions to take advantage of the £40,000 annual allowance. Those who don’t save enough into their pension may be forced to work longer or will have to make considerable sacrifices to their lifestyles in order to get by in later life.”

“Many people fall into a false sense of security and neglect to check in on their portfolios to track performance. This is a mistake. A financial adviser can offer guidance on how to make your money work best for you.”

Cost of retiring in London 82% more expensive than in Nottingham 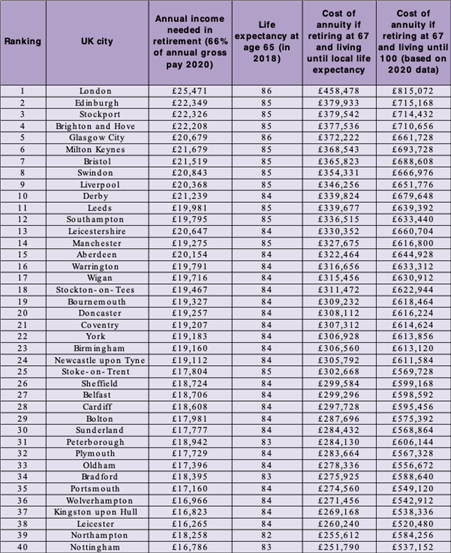