The number of UK pensioners living in the EU has fallen as the UK formally leaves the EU, says Salisbury House Wealth, the leading financial adviser.

Salisbury House Wealth says the number of UK pensioners living in the EU fell to 462,973 in the last year, down from 474,066 in the aftermath of the Brexit referendum in 2016*.

Popular destinations amongst retirees, many of which are renowned for their warmer climates, saw some of the biggest decreases in UK pensioners last year. These include the following:

The country with the highest population of UK pensioners is Ireland, at 129,661 last year. France and Germany are also home to a high number of British pensioners alongside Italy and Spain. Overall, 9 of the 27 European countries saw a decline in UK pensioners last year (see table below).

Many pensioners who return to the UK may face a higher cost of living than in the EU due to the higher costs of housing, food and drink in the UK.

The fall in British pensioners living in the EU last year could partly reflect fears over long-term citizenship rights and whether they would continue to be treated equally to other EU citizens, once the UK left the EU.

Over time it is expected that the number of pensioners living in the EU will continue to decline as current UK residents no longer have the automatic right to relocate to EU countries. Individuals looking to retire in the EU in the future will need to apply for a visa, which could be a lengthy and costly process. Those who already live in an EU country will be required to apply for residency before 30 June 2021.

Salisbury House Wealth says it is important for anyone who wants to retire abroad in the future to build a sizeable pension pot to ensure they can meet the costs of doing so. Moving abroad is costly due to housing, insurance and transport costs.

Key steps in building a sizable pension pot include, deciding what your goals are and rigorously sticking to a savings plan.

Tim Holmes, Managing Director at Salisbury House Wealth, says: “The last-minute Brexit deal will be a huge sigh of relief for British pensioners living in the EU. However, question marks remain over how this deal will unfold over the next few years.”

“Many UK pensioners have already packed their bags and left the sunnier parts of Europe behind in the fear that further complications would arise as a result of the UK’s departure.”

“British pensioners who are returning to the UK run the risk of facing higher living costs than destinations such as Spain, which they may not have factored into their retirement funds.”

“Retirement plans may change course from time-to-time – it’s key that individuals stick to a savings plan so they have plenty of flexibility and most importantly, can achieve their dream retirement when they get there.” 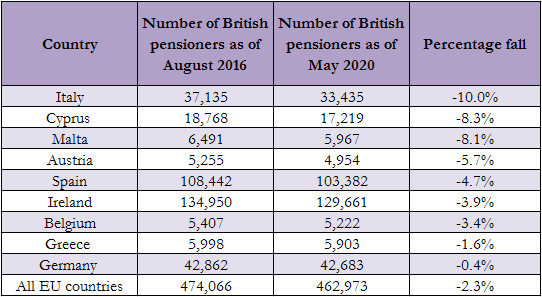