Savers have added an estimated £110bn to their personal bank accounts during the last year of lockdown*, shows new research by Salisbury House Wealth, the leading financial adviser.

This is nearly three times the average amount saved in a “normal year” of £41bn (see graph below).

The UK lockdown has allowed savers to significantly boost their savings through reduced spending on holidays, commuting and dining out.

Tim Holmes, Managing Director at Salisbury House Wealth: “A whole year of lockdown has allowed individuals to build up a healthy amount in deposit and savings accounts. However, with bank accounts offering negative real returns, savers should review whether they can move some of that cash out of bank accounts into better performing long term investments.”

“People often cut back on discretionary spending during times of economic uncertainty. This time around, the closure of a large part of the leisure and retail sector has meant people have made considerable savings from not being able to eat out or go to pubs and bars.”

“Once savers have built up a comfortable emergency fund, they could find they are better off over the long-term by moving surplus cash into their pension or stocks and shares ISA. The alternative is to see that cash gradually get eroded by inflation.”

Leaving too much money in bank accounts may be a poor choice as traditional bank accounts have zero or have extremely low-interest rates. The average interest rate on instant access savings accounts is now just 0.06%. For many people this means their cash will be growing at a slower rate than inflation, creating native real returns.

Savers with a long-term view may want to consider investing some spare cash in equities which have outperformed all other asset classes. Since 1925, UK equities have returned 12.4% a year, higher than global bonds at 6.6% and cash at 4.9% per annum.

Tim Holmes adds: “Quite often, money that is left sitting in bank accounts is not working as hard for savers as it should, particularly now when interest rates are at an historic low. Individuals should look at alternatives which can help maximise the returns on savings.”

“Undoubtedly savers might be tempted to splurge this extra cash when the economy reopens, but there’s a real opportunity to properly invest that money and see it grow into quite a sizeable nest egg.”

“With the Bank of England recently confirming interest rates will remain unchanged at a record low of 0.1%, this means that bank accounts will gradually chew up those deposits.” 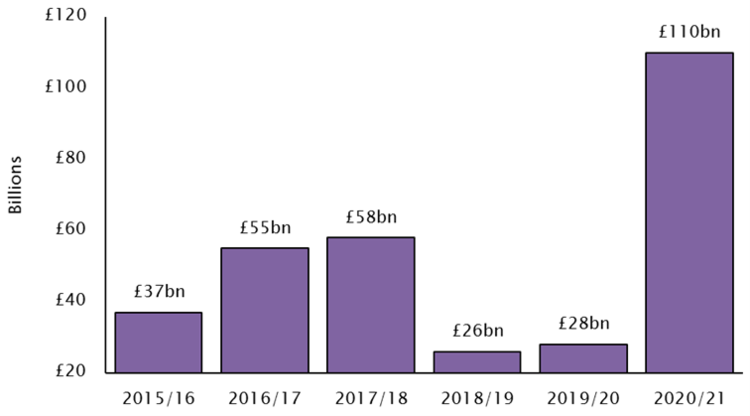 ← 10,500 pensions shared in divorce settlements in past year
Number of British pensioners living in EU falls as the UK formally leaves the EU →